all sport – all the time

The annual NFL Super Bowl is such a spectacle that sometimes the two teams competing can become secondary to the event.

Katy Perry’s halftime performance was breathtaking, the USA national anthem was sung with gusto and the crowd roared to life during the kickoff but this year, in this game, nothing could upstage the game.
Arguably the game greatest ever quarterback, going up against arguably the game’s greatest ever defence.
Seattle’s brash, young, trash-talking defence entered the game with one goal – to destroy Tom Brady and the Patriots.
Early on in the third quarter, it looked like Richard Sherman and the ‘Legion of Boom’ were going to have their way with New England.
Brady had just been intercepted for the second time and Russell Wilson and the Seahawks offence had reeled off 17 unanswered points.
Enter the assassin known as Thomas Patrick Edward Brady.

After two weeks of allegations of cheating by Brady and his coach Bill Belichick and with his past two Super Bowl appearances resulting in losses – Brady’s legacy was squarely on the line.
As usual, he delivered in spades.
Brady’s fourth quarter performance will go down as one of the greatest in history.
13-15 passing and two touchdowns to drag the Patriots into the lead when all hope looked lost.
Brady was part surgeon, part butcher – as he carved the Seahawks defence to shreds with the precision of a scalpel.
With Seattle’s Pro Bowl defensive backs carrying numerous injury concerns, Brady led dynamic receivers Julian Edelman, Danny Amendola and tight end Rob Gronkowski into pass after pass as Amendola caught a lightning bolt from Brady with eight minutes remaining before Edelman – who had 108 yards receiving – caught what ended up becoming the match-winning TD with 2:02 left on the clock. 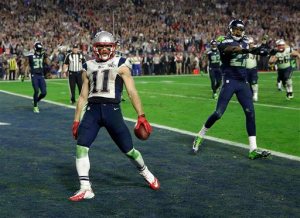 With Brady’s artistry complete, it was Wilson, Marshawn Lynch and the ‘Hawks turn to try steal yet another Super Bowl away from the Pats.
Wilson provided Lynch with a 31-yard catch and run down the sideline before he found Ricardo Lockette on 3rd and 10 to move the chains and keep the game alive.
Then this happened;
Still needing 38 yards to secure victory, Wilson threw up a jump ball in Jermaine Kearse’s direction.
With free agent rookie Malcolm Butler draped all over him, the ball was tipped before bouncing off both of Kearse’s legs and landing softly in his arms for the miraculous catch.
The look on Brady’s face as he watched the big screen was one we had seen before.
As the Patriots stared down victory against the New York Giants in 2007 before receiver David Tyree made a ridiculous catch, pinning the ball to his helmet with his right hand to secure a wild reception.
Eli Manning then found Plaxico Burress for the game-winning TD – breaking the Patriots hearts.
Ironically, the Giants theft of Super Bowl XLII was at the University of Phoenix Stadium – the same site of Super Bowl XLIX.
This time around, the stadium known as ‘The Toaster’ had a happy ending for New England – but not before some considerable drama!
As Kearse landed on his back and completed the miracle catch, the Seahawks were on the five yard line with the best red zone running back in the business ready to pounce.
With 66 seconds to go, Lynch took the ball from Wilson and rumbled to the one yard line, looking like he would score at one stage before going down agonisingly close to the goal line.
Almost accepting the fact that Seattle would be able to score, Patriots boss Belichick decided to save his timeout, hence allowing the clock to run all the way down to 26 seconds.
So, let’s reset the scene;
26 seconds to go in arguably the most hyped Super Bowl in its 49-year history.
One yard stands between Seattle’s offence and back-to-back NFL championships.
One yard stands between Tom Brady and his fourth ring, but he is on the sidelines, helpless at this point and probably hoping for a miracle.
Three attempts to gain one yard for all the marbles with the most devastating RB in football – ‘Beast Mode’.
It’s a foregone conclusion, right? Seattle repeats as champs, right?
Wrong.
Head coach Pete Carroll makes the unbelievable call to pass on second down and not take advantage of ‘Beast Mode.’
Wilson takes the snap and receivers Kearse and Lockette run a simple pick play.
(For the casual NFL fan, a pick play is where two receivers simply rub off each other to free one up from their defender)
Former Seahawk Brandon Browner bumped Kearse at the line of scrimmage, allowing rookie Malcolm Butler to shoot the gap and intercept Wilson’s attempted game-winning pass.
For Butler, it was his first career interception and after the game in one of his dozens of interviews he told reporters how he got burned on that same play in mid-week practice and Belichick had told him to get into the study room.
His film study paid the ultimate dividends as he made the Super Bowl-clinching play to give the Patriots the victory. 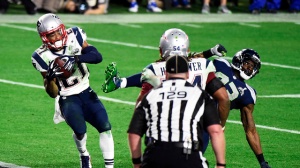 As an avid ESPN viewer, national sports talk show like ‘First Take’ and ‘Mike and Mike’ have ridiculed Carroll and the Seahawks for the play-call at the end of the match.
How about instead of torching the ‘Hawks – who incidentally were a single yard away from back-to-back titles – let’s rejoice in the greatness of Tom Brady, Bill Belichick, believe it or not Malcolm Butler and the champion New England Patriots!?